Delia Susana Costa, Argentinean, graduated from the University of Buenos Aires as: Public Accountant and Bachelor in Business Administration. During her adolescence she obtained the title of Music, Theory and Solfeggio teacher.

Her interest in art, manifested since her childhood, led her to develop a career in this field, for which she adopted as her artistic name: Delia Solari, her husband’s surname. She became very interested in this activity when she left the practice of her profession, attending courses of various kinds and visiting exhibitions in museums and galleries in the country and abroad.

She worked on Geometric Neo Figuration and is now dedicated to Geometric Abstraction, with her own style that she called «Sensitive Planimetric Structuralism», whose development is explained in the book of her authorship «AESTHETIC ENUNCIATES».

For the plastic value of her works she was internationally distinguished with numerous awards and praised by famous critics.

The French critic Ionel Jianou said about her work «What a richness and variety in the themes approached! From the most ingenious combinations of geometric figures to the relationship between music and painting, from the problems of light to the resonance and harmony of colors, from the tenderness and the sensitive aspect of the images to the vision of a cosmic movement, everything has been treated with intelligence, strength and fervor in Delia Solari’s dialogue with the Universe». 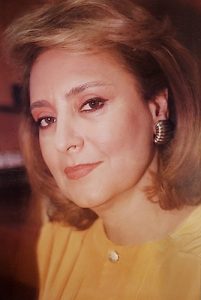